skip to main | skip to sidebar

Still in Cairo: The Story of the Gaza Freedom March


Subject: Computers sent to Ireland
Dear Gail,
I just want to let you know that the 3 laptops are in Ireland and should be on their way to Gaza soon.
Thank you and Thank MECR.
Salam
Dina

oneBrightpearl: They Will Never Beg

oneBrightpearl: They Will Never Beg
Posted by nic abramson at 5:15 AM No comments:

OF BAMBOOZLEMENT AND BAILOUTS

Of Bamboozlement and Bailouts

Obama’s recent speech on April 22 on overhauling financial regulation, is an important example of the right, well crafted, cool message at the right time; a rather nice piece of expository writing that I felt needed to be analyzed and stirred a bit to get a clearer taste of content and substance; I read it several times; I enjoyed what I was reading as one enjoys an ice cold lemonade on a hot day. But you can only drink so much lemonade, especially when you taste artificial ingredients and unhealthy sweeteners.
The more I read and the less satisfied I became, as the lemonade's artificial ingredients surfaced to the top; the more I stirred this particular presidential lemonade, the clearer I began to see the artifice, the unhealthy ingredients, the cancerous sweeteners; it all raised the fundamental questions and serious concerns about our government’s words, weighed against reality and actions; here are just some key verbatim excerpts from that speech, my reactions, my question after each and my conclusions:
• 1. QUOTE: “a new foundation for economic growth and Wall Street is absolutely an essential part of that foundation”…
MY QUESTION/COMMENT: Why mention only Wall Street? Aren’t there other financial” streets” in other parts of our world?
MY CONCLUSION: this is very telling of our government’s sense of exceptionalism; it is implied that we’re the only ones that can make a difference; it is implied that the
dollar will rescue the world. Even if we were 100% certain, would not an inclusive approach be more effective? Furthermore our government's passionate focus on success defined by money and profit is not the “foundation” we need. The “foundation” we do need is a “Cultural foundation” where success is not measured by the dollars ones makes. Where success is measured by our principled words backed by principled actions, such as prosecution of well known war criminals who we know still are at large.

• 2. QUOTE: “…some of these lobbyists work for you and they’re doing what they’re being paid to do”… these reforms are in the best interest of the financial sector”
MY QUESTION/COMMENT: why do the financial moguls need lobbyists? And if we conclude that lobbyists are needed to advance one’s plight/cause/company, in the “financial sector”, then where are the lobbyists for the “poor sector”? Where are the lobbyists for people at the other end of humanity’s spectrum; you know, the poor and those who do not make millions in bonuses, those who barely scrape enough to put bread on the table! Where are the lobbyists for the people of Gaza who are being strangled with our support and our dollars?
MY CONCLUSION: our government is in no uncertain terms more than ever a greedy corporacracy motivated by personal profit and accumulation of personal wealth; the above confirms it; the “regulations” being proposed in this handy speech, are just another puff of strong hopeium ;

• 3. QUOTE: ” …the failure of Lehman Brothers”
MY QUESTION/COMMENT: why don’t you call what Lehman did by its proper name? Fraud and Criminal?
CONCLUSION: it’s a good old, privileged, well off, boy’s club , all controlled by, and paid for by white boys, who continue to control every presidency; what Lehman does is somehow only a “failure”, an implied lapse of judgment; nobody goes to jail for that; in fact, my friends, we’ll give you more money so you can keep doing it; but, in stark contrast, the poor, not privileged, often not white (or white looking) young man who himself may have had a lapse of judgment, surviving his world of daily despair, in defending himself against unwarranted police inquisition and instigation, is beaten, handcuffed and accused of resisting arrest and hauled to jail as a criminal.

• 4. QUOTE: “ We had to deploy taxpayer dollars”...to bailout the fraudulent criminal Wall Street slugs.
MY QUESTION/COMMENT: Mr. President, now that all these criminal firms seem to be once again making record profits; why not DEPLOY these criminal firms’ dollars to bailout the taxpayer?! Seriously!This would be equitable common sense! But common sense is not common practice when it comes to helping the common folk, isn’t that right?
CONCLUSION: See number 3

• 5. QUOTE: “…we’ll help ensure that our financial system-and our economy continue to be the envy of the world"
QUESTION/COMMENT: Why must our financial system be “the envy of the world? Why not strive to be the best that “WE” could be; We are focusing on the wrong and self-destructive motivational driver! A pernicious sense of superiority that is making us anything but the "envy" of anyone!
CONCLUSION: See number 1 ; this alsodemonstrates why our government’s foreign policy continues to fail: because we see ourselves as a Nation ABOVE Nations instead of a Nation AMONG Nations!

• 6. QUOTE: “…many of these practices (fraudulent)were so opaque, so confusing, so complex that the people inside the firms didn’t understand them, much less those who were charged with overseeing them”
MY QUESTION/COMMENT: Please, please do not offend us! You expect us to believe that those fraudulent financial experts millionaires, advisors, with teams of PhDs and economists and MBAs from top USA Business Schools , did not understand the financial product they were selling? Really now? Assuming that’s true, then our Business schools are not doing a good job are they? And what about if firms in other sectors used the same logic as an excuse for their failings? For instance: if Toyota, Kia, Maserati, BMW, Volvo, Skoda or any other reputable firm’s innovative product (let’s use a car as an example of a new product; and let’s call this new car: the HoodwinCar) caused unexpected accidents and pain? Would you buy the excuse you are using for the failings of the fraudulent wall men with sacks of gold? Following that same logic the HoodwinCar manufacturer’s excuse could plausibly sound like this: “The new HoodwinCar failed and caused pain and suffering because the manufacturing process is so opaque, so confusing and its engineering so complex that even the people inside the firm don’t understand how the Hoodwincar functions”.
CONCLUSION: Our government thinks we are stupid; hence, they can tell us whatever they like and we’ll believe it as long as there are enough reality shows, and enough cheap gastroexplosive fast foods to keep our fat bellies full and our little mouths shut.

A final observation for our President on this particular speech: why does this speech end with “God Bless The United States America”? If you genuinely believe we must set the example for the rest of the "world'; if you truly believe this speech was about fixing the “global” financial machine(and hence those who suffer by this wretchedly broken machine), if you truly believe there is a symbiosis between "all the economies of the world", why not bless (if you must) our world and not just the US Of America?
mm
Posted by MythsAmerica at 7:03 AM No comments: 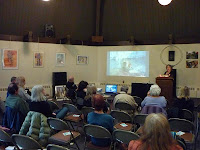 It's time to cement our solidarity

It's time to cement our solidarity with the people of Gaza!

While conditions in Gaza have been steadily worsening (severe electricity cuts, lack of potable water, etc.), Palestinians have been bravely protesting the Israeli siege. Almost every day now there are marches to the border in protest of the Israeli declared buffer zones. Click
We can demonstrate our solidarity by supporting Free Gaza's efforts to break the siege.  The Free Gaza Movement is calling on communities, schools, hospitals, trade unions and families around the world to sponsor bags of cement and school supplies to send to Gaza.
They will be loaded onto Free Gaza's Irish cargo ship, the
We can further cement our solidarity by making our support for the buffer zone protests and the Free Gaza flotilla a theme for  Nakba Day (May 15) demonstrations world wide.  As the Palestinians of Gaza march to protest the buffer zones and welcome the Free Gaza flotilla, we can hold twin demonstrations of support in our home towns. Take photos of your actions and we will offer a prize (a $100 donation to Free Gaza in your name) for the best Nakba Day photos featuring support for the buffer zone demonstrations or Free Gaza. Go ahead -- let your creativity loose and tell the world about the flotillas aiming to break the siege.
In solidarity for peace and justice,
Gaza Freedom March
ACTION UPDATES!
http://www.freegaza.org/en/home/56-news/1164-introducing-the-mv-rachel-corrie
Support the Gaza Flotilla and
Photo Contest
Submit the best Nakba Day action photo and we'll make a donation in your name to the Free Gaza Flotilla!
View report backs from
Stay up-to-date on the
Sign the
Subscribe to
Posted by Fred at 8:46 PM No comments:

Older Posts Home
Subscribe to: Posts (Atom)
"Despite the media blackout, which is a disgrace, this is turning out to be a really spectacular triumph, I think, and it's hard to express properly my admiration and respect for those who are directly engaged."
-Noam Chomsky

Photos of the Gaza Freedom March:

Did you know? Gaza

DOUBLE CLICK ON TV IMAGE TO SEE IT FULL SCREEN

Help Us Break the Seige

It looks like twelve residents of the Hudson Valley will take part in the Gaza Freedom March from Dec. 25 to January 4. We will be part of The International Coalition to End the Illegal Siege of Gaza formed after Israel's 22-day assault on Gaza in winter 2008-09. We are a diverse coalition that represents all faiths (and no faith) and is focused on human rights in conformance with international law.

You can help us raise money for the march by sending your donation to: MECR, Box 1362, Woodstock, NY 12498. Please write "Gaza" on the memo line to make sure it goes to our trip.

Gaza Shall Not Die! (video)